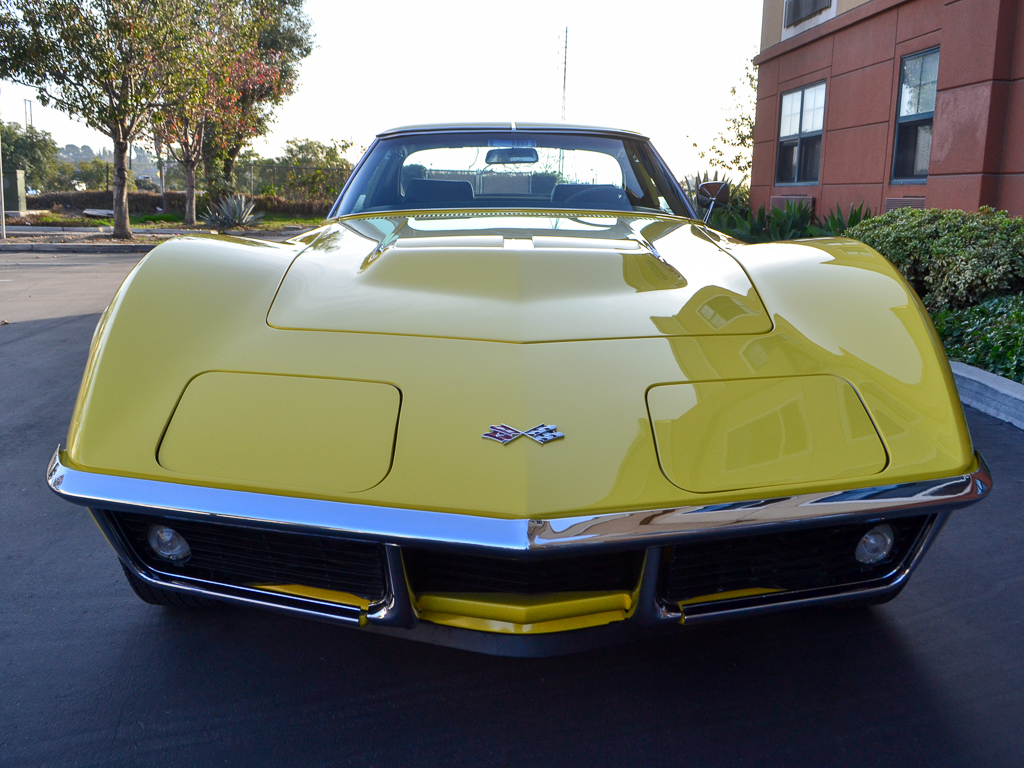 We here at Corvette Mike are always on the hunt for great cars. Whether they be late model, low mile examples or a rare and unique vintage muscle car. We never know what might turn up or be offered to us. But, we have to admit, the rare and unique pieces are our favorites! So, we were especially stoked when this Daytona Yellow ’69 was presented to us! The ’69 is looked back on fondly and considered one of, if not the most desirable of the third generation Corvettes.

The C3 or “Shark” bodied cars were introduced a year earlier in ’68 and they were instant hits! Though almost identical to the previous generation C2’s underneath, the C3’s were all new topside! The Mako Shark II/Manta-Ray inspired body was sleek from end to end with a lower center of gravity than the previous generation Corvette, making a great handling car even better! The interior was aircraft-like, which came in handy with the vast array of motivating power available under the hood! From the base 300hp small block to the monster 500hp plus L88 big block, there were enough choices to pretty much “custom build” the Corvette of your dreams (and your competitors nightmares if racing was the intention). And the vast array of available options gave buyers the ability to build some fairly unusual cars. For example, you could combine the awesome L71 427/435hp big block with a Turbo 400 automatic transmission. Or the powerful Tri-power L68 427/400hp big block with air conditioning!

Other options like power brakes, power steering, power windows, tilt/tele steering wheel, leather seats, am/fm radio and for the first and only year offered on a C3; side mounted exhaust system! The list goes on and on. What you ended up with was a car just like the one presented here. It’s got all the options listed and more! On top of that, add in a meticulous nut and bolt frame off restoration done to the highest of standards utilizing many of the original parts, including the engine and most of the interior! Then top it off with just about every piece of factory documentation including the Tank Sticker, Build Sheet, Protect-O-Plate, Owner’s Kit. Even the original keys in their original envelope with the knock-outs still in place! This is an investment grade Corvette not to be missed by any discriminating collector who truly wants the best parked in his or her garage! Stk #5893

For additional information and photos: http://corvettemike.com/used-corvettes-for-sale/1969-Corvette-Coupe-2493