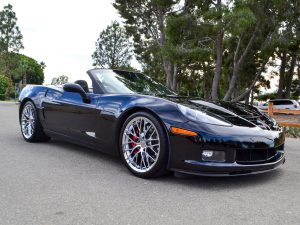 When the sixth generation Corvette was introduced as an ’05 model, it was a huge hit with the public and press alike. Chevrolet got just about everything right with the car. And when the new ZO6 was introduced the following year, it didn’t take long to see that a major home run had been achieved. The ZO6 featured a 505hp small block 427 under its carbon fiber hood along with a 6-spd. manual transaxle, aluminum Hydro-Formed frame, special brakes and suspension and tires. And it was a monster! Complaints about the car were few and far between. However, one was the fact that it didn’t come in a Convertible! Because of the very high performance nature of the ZO6, it wasn’t available in Convertible or with a removable Targa roof panel like the base Coupe was. But good things come to those who wait . . .

To commemorate both the end of C6 production and the 60th Anniversary of Corvette, Chevrolet decided to bring out a very special edition. Two special editions, actually. The 427 Convertible Collector Edition gave buyers the best of both worlds. It combined elements of both the ZO6 and Convertible including the mighty LS7 427/505hp engine with dry-sump oiling system, but retained the Convertibles steel frame. It also had carbon fiber hood and front fenders like the ZO6. All 427 C.E.’s came with 427 badging on the hood, ZR-1 style rear spoiler and Michelin PS2 performance tires. The other special edition was the 60th Anniversary Edition what came in Arctic White exterior with Silver Pearl graphics and Blue Diamond leather wrapped interior.

The car presented here is a 427 Convertible in triple Black (one of only 429 built in Black) with optional chrome ZR-1 style wheels w/Red calipers. This one year only Corvette is loaded with options including 4LT/1SC Equipment Group which included just about every available option like Leather Wrapped interior. It’s a local So. Cal. car that has only been driven 11,800 miles. It’s in pristine condition throughout and looks both beautiful and sinister at the same time! Stk #5879