by Steve Burns on February 18, 2014 via corvetteblogger.com 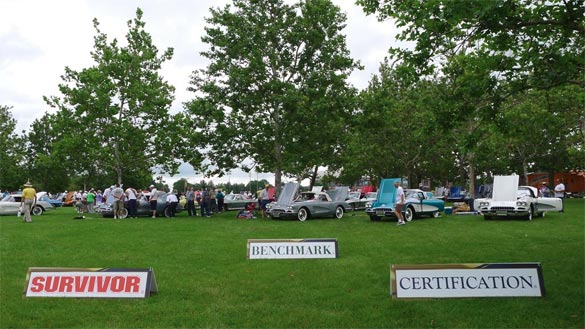 Back in 1990 Bloomington Gold introduced their SURVIVOR award for original, unrestored Corvettes. Award winners would need to be 20 years old, complete a short road test, and be at least 50% unrestored in 3 of 4 categories. Now, as we count down to the 2014 show, they’ve announced some sweeping changes to their SURVIVOR judging program.

SURVIVOR Corvettes are those that have remained largely original since new. They can be used as a guide by others restoring similar cars. As the SURVIVOR mantra goes, they’re “Worn in, but not worn out.” They are historically significant and shouldn’t be restored.

The new SURVIVOR award measures a car’s originality in Gold, Silver, and Bronze levels similar to Certification judging. SURVIVOR GOLD award winners are 80% or more unrestored in all four sections (interior, exterior, engine, and chassis). SURVIVOR SILVER Corvettes are 66% or more unrestored in all four sections. Finally, SURVIVOR BRONZE winners are more than 50% unrestored in any three sections. Furthermore, all SURVIVOR Corvettes will have OEM Engine stamps, Trim Tags and VIN Tags. Like before, eligible cars need to be more than 20 years old and successfully complete the 10 mile road test.