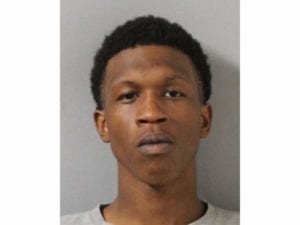 NASHVILLE, TN — Metro Police say an 18-year-old who has just been released from jail for auto theft is wanted for stealing a Corvette, shooting its owner and setting it on fire Monday night.

Marvin D. Summers, Jr., 18, of 18th Avenue North, is charged with three counts of felony aggravated assault and one count of auto theft . Officers are working to locate him.

Just after 5 p.m. Monday, Maurice Walker, 45, parked a 1994 Corvette outside a market on Dr. D.B. Todd Jr. Boulevard and left the keys inside. Summers allegedly got into the car and drove away. Walker came outside moments later and was offered a ride by another citizen and his two friends to give chase. The car was stopped in traffic on Rosa Parks ad Walker confronted the thief. Police allege Summers then shot Walker in the leg and fired shots at the people who had given him a ride. The Corvette was found burning minutes after the shooting at the intersection of 14th Avenue North and Jenkins Street.

North Precinct officers arrested Summers Tuesday night for being in a stolen 2007 Pontiac G6. Officers spotted the Pontiac traveling on 24th Avenue North. The car headed through a yard, a chain link fence and down an embankment. It was severely damaged. Summers and two 14-year-olds bailed from the car. Summers was taken into custody after attempting to hide underneath the porch of a Pecan Street home. His bond on charges of auto theft and evading arrest was set Tuesday night at $40,000. On Thursday, Summers he pleaded guilty to a misdemeanor, was placed on probation and released from jail.