2019 Chevrolet Corvette ZR1 First Test: Out With a Bang

This is it. The zenith. The top dog. The 755-horsepower ne plus ultraChevrolet Corvette C7. The most powerful and likely the last variant of the front-engine Corvette. 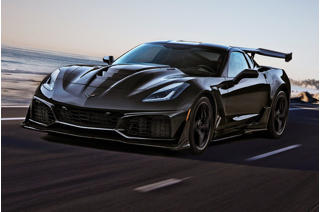 While waiting for the arrival of the mid-engine C8 somewhere in the not-distant future, for the 2019 model year, there are now 28 iterations of the seventh-generation Corvette (C7), including coupe/convertible versions of Stingray, Grand Sport, Z06, and now the ZR1. Is this as good as it gets? Is the ZR1 the greatest Corvette ever?

Let’s start with what makes the ZR1 the ZR1, namely its mighty LT5 motor. If you like comparisons, this C7 ZR1’s supercharged V-8 makes more than double the horsepower of the V-8 in the 1990 C3 ZR1 and 117 more horsepower than the C6 ZR1. Based on the venerable LT4 found in the Corvette Z06, Camaro ZL1, and Cadillac CTS-V, the 6.2-liter LT5 features a new 95mm throttle body, both port- and direct-injection fuel delivery, an upgraded crankshaft, a new oiling system, and a new Eaton supercharger. At 2.6 liters, the supercharger is 52 percent larger than the LT4’s, yet cruising at 80 mph, it draws only 1 horsepower while providing virtually no boost. On the other hand, it needs 110 horsepower to spin its roots-type helix rotors up to 15,860 rpm to make peak boost pressure of 13.96 psi near redline. The LT5’s intercooler has roughly double the heat exchange capacity of the LT4’s, and there are four new heat exchangers (13 “radiators” in total) tucked hither and thither. Combining all of this with the new “halo” hood, the ZR1 boasts 41 percent more air flow than the Z06, which is notoriously prone to power-sapping engine-protection mode due to excess heat. Rest assured, Corvette “Jake” fans, the two ZR1s we had showed no problems with heat during our instrumented testing (eight consecutive quarter-mile passes followed by a dozen laps of our figure-eight course). Nor did either lose power with hot laps (two sets of three each) at Willow Springs Raceway, where we’ve previously documented issues.

Bolted to that all-American pushrod motor (which prefers to gulp fuel we can’t pump in 91-octane California) is an optional eight-speed automatic transmission ($1,725). In Track mode, enter the Performance Traction Management (PTM) program, select Sport 1, press the brake pedal to the floorboard, whack the throttle similarly, wait for the revs to stabilize (at about 1,400 rpm), then release the brakes. Doing this will produce a wisp of wheelspin that will be monitored/managed all the way through first gear. The best launch-control results made 0-60 times of 3.2 to 3.3 seconds and steady quarter miles of 11.2 to 11.4 seconds at 130 mph—and anybody could do that, repeatedly. The launch control is that good. On the other hand, turning all the electronic aids off and using the “driver’s best effort” to manage wheelspin ekes out a couple tenths here and few mph there. Surprisingly, it’s easy to launch, considering the engine produces 715 lb-ft of Michelin-melting torque. The throttle response is unexpectedly linear, the tires so talkative that finding the just-right progression between runaway wheelspin and ultimate acceleration only takes a couple attempts to learn. Make no mistake, it can get out of hand quickly, but there’s a friendly cooperation inherent to this car that’s lacking in, say, a 707-hp, 650-lb-ft Hellcat that simply cannot put its power to the ground. The ZR1 is remarkable in this way.

Our best efforts resulted in a 0-60 time of 3.0 seconds on the way to a 10.8-second 133.1-mph quarter mile. Probably owing to our 91- not 93-octane fuel, we were slightly behind GM’s claims of a 2.9-second 0-60 time and 10.6-second/134-mph quarter mile. Our best results came from the ZR1 with its optional ZTK Track Performance package ($2,995), which replaces Michelin Pilot Super Sport ZP (run-flats) with grippier Pilot Sport Cup 2 ZP tires. The ZTK package also adds stiffer suspension tuning and greater aerodynamic downforce courtesy a flat undercarriage, a front splitter with endplates, and the adjustable “high” wing. That aero pack offers 60 percent more downforce than the comparable Z06/Z07 Stage 3 setup. Chevy says it nets 950 pounds at top speed (212 mph). They also say Vmax testing on the autobahn drained all the fuel tank in 15 minutes. Because of the ZTK’s added downforce/drag, we had anticipated the “low-wing” car to perform better in a straight line, but instead it came down to initial tire grip. The high-wing car simply dug in better, maintained grip throughout first gear, and that’s all she wrote.

It Goes Around Corners, Too

The two quickest Corvettes to lap our figure-eight course (Grand Sport and Z06/Z07) tied at 22.3 seconds. Our editors often say the 2017 Grand Sport was the best-balanced Corvette ever, with the grip of the Z06/Z07 but an ability to put its power to use that the Z06/Z07 lacks. Its impressive lap proves this. We expected a similar lap time from the ZR1 duo. However, in a case of bringing a pair of howitzers to a knife fight, they only managed to circle our racetrack in a bottle in 22.7 and 22.9 seconds. Why? It’s simply too difficult to use all of the power in a parking lot, and there’s twitchiness to it that previous Corvettes didn’t suffer. A mere week after the infamous and unfortunate Detroit Grand Prix pace car wreck, test driver Kim Reynolds said: “Brakes are killer—you can drop the hammer at virtually the last second. Turn-in feels like lateral suction, but after that there’s a bit more understeer than I’d like. Midcorner grip is great, then exiting, the tail walks (using third gear). It steps out in a digital way—just pops out a notch very quickly, and you have to respond very modestly to it to avoid a “tank slapper.” Tremendous power—wow wow wow.” So besides this tendency to “walk the tail,” there wasn’t as much lateral grip on the skidpad portion, either. Where the Z06/Z07 sustained 1.17 g and the Grand Sport 1.18 g, the ZR1 pair managed 1.07 g and 1.11 g. It’s not much difference, but it all adds up.

When asked to compare the ZR1 to the Z06, Pobst said, “The ride is more compliant, especially in the most aggressive mode. Brakes are still strong—as always, world class. The [ZTK] wing does add high-speed stability. Even the ZR1 without the aero package is better-balanced [than the Z06/Z07] in high-speed corners.” However, he followed up with, “While the car has a big bump in power [over the Z06], it’s still twitchy trying to accelerate in the lower gears. And that’s the ‘Vette’s great downfall.”

When asked about how the ZR1 handled the duress of making three or four hot laps in succession, Pobst said, “Happily, greatly improved cooling keeps both intake temps—as a result of the larger supercharger and intercoolers—and engine coolant and oil temps to more survivable numbers. I saw stable readings under 220 for water and under 275 for oil. Still rather high, but much better than the pegged readings of the poor Z06.”

Around town, the ZR1 draws a crowd when parked, unsolicited questions from grocery store employees retrieving shopping carts, and even more thumbs-up reactions on the road. It is as over-the-top as they come, as it should be. On the road, the non-ZTK-equipped ZR1 rides as smoothly as every other C7 Corvette I’ve ever driven. The ZTK is harsher, like the RS versions of the Porsche 911 GT2/GT3 are. The 2019 Chevrolet Corvette ZR1 has variously succeeded and failed in setting performance records, however. It is indeed the quickest to 60 mph and fastest quarter-miler Corvette we’ve ever tested on the dragstrip, edging out a Z06/Z07, also with an eight-speed automatic. It stopped from 60 mph 2 feet shorter than the previous best Corvettes did (a handful of Grand Sports and Z06s). It lapped Willow Springs faster than any previous Corvette, yet it failed to set an outright record there, on our skidpad, or to top our figure-eight list. It is true the ZR1 is an awesome achievement, costing a whole trunkload less money than those above (and many below) it on the Willow Springs lap times list. At the end of the C7-era, this is indeed as good as it gets for a front-engine Corvette. Unless there’s a factory “lightweight” version coming or a track-only special, there aren’t any more tricks up the sleeves of Corvette engineers. Besides, they’re all working on the mid-engine replacement. Indeed, Corvette fans, this is as good as it gets, warts and all, which means it’s the perfect farewell for the C7.