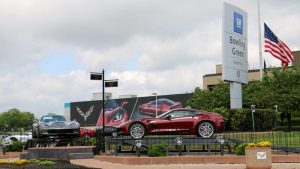 We are getting very close to the National Corvette Museum’s Bash Event where the Corvette Team rolls out 2018 model year Corvette. This will be an interesting year as always with lots of surprises along the way.

We are now able to share some important dates for those of you interested in ordering a 2018 Corvette.

Dealers can start keying in orders on April 13th. These are preliminary orders as dealers will be officially notified of their first allocations for 2018 Corvette production on April 27th.

The 2017 Corvette model year will come to a close on Friday, June 2nd. 2018 Corvette production starts up on the following Monday (June 5th).

Dealers can submit orders for 2018 production through June 15th which will be the final order cycle before the plant closes.

Production of the 2018 Corvettes will continue through June and July, and will come to a stop on July 31st. The Bowling Green Assembly Plant closes for three months as upgrades to the plant are performed. The plant’s closure is expected to run August, September and October. 2018 Corvette production will resume from where it left off on the 1st of November.

One important date that is still unknown is the official pricing for the 2018 Corvette models. That usually comes in May or June.

There’s been talk of a special edition for 2018 which is a given. As this is the 30th Anniversary of the 1988 35th Anniversary C4 model, our wish is a 65th Anniversary C7 version of the “White-Out” Corvette, complete with a white interior. We know more on Monday!

We are expecting a couple of new colors based on the Q&A session from Sebring. They were supposed to start painting body panels this week in the new paint shop. Hopefully that goes well so that we can see a completed car in the new color at the Bash.