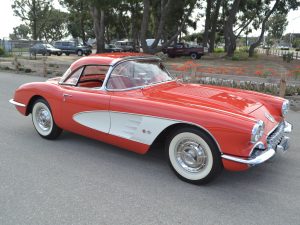 By the late ’50’s, the “Jet Age” was in full swing! Rockets were in and Detroit was determined to incorporate elements of them into their cars. Anything that represented speed or flying was cool; fins, side spears, bullet bumpers, and taillights. Even rocket hood ornaments found their way onto American passenger cars. And Corvette was no exception, albeit in a more subtle way. The height of this came in ’58. Big changes came that year for Corvette. It was completely redesigned with a longer and wider body, which meant that the interior was roomier, making it much easier to live with on a daily basis. The headlights also grew from two to four. But what made the ’58 especially unique with the abundance of chrome and other jet-like features. Out front, was a big grille filled with chrome “teeth”. Just above it was a “louvered” hood. On top of the front fenders were chrome strips that ran from the headlights to the windshield. And out back were two chrome spears that ran parallel from top to bottom of the beautifully contoured trunk. The car looked amazing if a bit over the top. And if represented the time perfectly. But, apparently the designers back in St. Louis felt it might have been too much of a good thing because the following year the “Gingerbread” was pretty much gone, never to be seen again. Making the ’58 one of the most unique and sought-after Corvettes ever produced! To this day, it’s near or at the top of the list of any Corvette collector. Which leads us to the gorgeous ‘58 presented here.

As ‘58’s go, this would be one of the more coveted examples. From its stunning and unusual one year only Signet Red exterior with White coves, to the matching interior, to the powerful 283/270hp, dual quad V-8 backed by a 4-spd manual transmission under it’s louvered hood, this is one beautiful Corvette! This award winner has benefited from a complete, nut and bolt, frame off restoration and features a correct engine, 3.70 Posi rear end, Wonder bar radio, heater, courtesy lights and matching hard top, this is the Corvette own, drive, show and admire! Stk #5907